Train tracks below the Finch house

Walter Finch (ˈwɒl.tər ˈfɪntʃ | Waulter Finch) was the fifthborn and the third son of Sven and Edie. Walter spent 30 years in the basement following his older sister Barbara's death, traumatized and unable to face the outside world until the end of his life.

Walter was traumatized as a child by his older sister Barbara's death, which led him to an extreme fear of the family curse. This led him to erect a bunker underneath the house, wherein he resided for over thirty years of his life. On his last day alive, he finally finds the courage to venture out and face his fear.

The player plays as Walter, who is seated in a chair in front of a calendar, a clock, and a can of peaches. Walter slowly opens the can and eats the peaches. The player repeats this action several times, and each time the screen goes black and another can of peaches sits in front of the player, and each time, the date on the calendar progresses. Each time, there is a loud rumble from an unknown source, which is later revealed to be a train running beneath his bunker. After Walter opens the last can of peaches, the screen fades once more, but this time there is no can of peaches and no rumble.

Walter gets up and goes to one end of the bunker, opening a hatch on the floor. Climbing through, he goes down a ladder and over to a brick wall at the end of a tunnel. He takes a sledgehammer and smashes through the wall, stating that he can't keep living the same day over and over anymore. He climbs through and slowly walks through the mouth of the tunnel, which leads outside. As he narrates and walks along the train tracks in the tunnel, he becomes to engrossed in the scenery that he doesn't hear or seen the oncoming train. 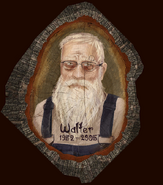 Edie's mural of Walter for his memorial shrine. 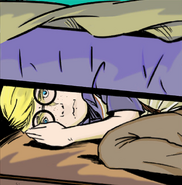 A traumatized Walter in the comic.