Brown
Sanjay Kumar (ˈsæn.dʒe kuː.ˈmɑːr) was the husband of Dawn Finch and the father of Lewis Finch, Milton Finch, and Edith Finch.

Not much is known about Sanjay's personality, as he is rarely mentioned in-game. It can be presumed, however, that he was a generous and caring man, as he was an evacuation specialist who contributed to disaster relief efforts in India. He is also seen in a photograph with his wife Dawn and their three children; Lewis, Milton, and Edith, implying a rather family-oriented personality.

In 1986 and 1987, Dawn was involved in volunteering and disaster relief work in India, where she met and eventually fell in love with Sanjay. She took an interest in Indian culture which would spread to her home life, apparent in the decorations within her teenagehood room and the presence of several Indian cookbooks around the Finches' house.

A memorial to Sanjay is located in the classroom, and prominently displays a newspaper clipping suggesting that Sanjay died when an earthquake struck the site of one of the relief efforts. His tombstone states that his death occurred on February 22, 2002, eight days after his daughter Edith's third birthday and one year before his son Milton's disappearance.

Within Dawn's closet in her adulthood bedroom are Sanjay's disaster relief vest and nametag, a framed photograph of him, and a framed copy of an excerpt from the 1941 book Daily Prayer. 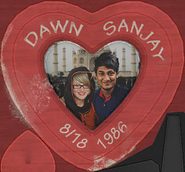 The photo of a young Sanjay and Dawn in the latter's teenagehood bedroom.

The family photo found in the classroom.

The photograph of Sanjay found at his memorial and in Dawn's adulthood bedroom.

The newspaper framed above Sanjay's shrine.