This article is under development. If you can, please add to the page. 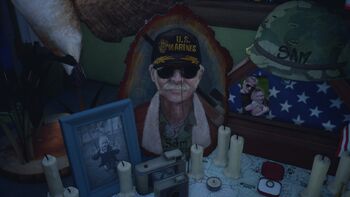 "Dawn, I promise, you'll never forget this weekend."
– Sam to his daughter Dawn

Sam Finch (ˈsæm ˈfɪntʃ) was the thirdborn, the first son and one of the twins of Sven and Edie. He married a woman named Kay Carlyle and the couple had three children: Dawn, Gus, and Gregory. Following his son Gregory's death, he got divorced and remarried with a unnamed woman, he had no children from his second wife.

Sam was a very adventurous and pragmatic man, as evidenced by his enlistment into the marines as well as the hunting trip he takes with his daughter Dawn.

Sam's story is told from the perspective of the camera brought on his hunting trip with Dawn (15 years old). Each scene progresses until a particular sight is photographed. The first scene is Sam excitedly telling Dawn about the fun they will have on the trip; Dawn is visibly unenthusiastic. The next scene is Dawn standing in front of the park's sign, reading her book. This is followed by Dawn taking a humorous picture of her father urinating on a tree. After that, Sam recounts his last trip to the park, and Dawn spots a buck in the distance, photographing it. Sam then pressures Dawn into shooting it, taking a picture of her preparing the shot and then taking another picture at the moment the deer is shot. The final scene is where Sam sets the timer on the camera, jogs up to the ridge where Dawn and the deer are, and is killed when the deer knocks him over the edge.

After he convinces Dawn to shoot the deer, Sam sets up a dramatic shot of its body atop a ridge, with Dawn crying over it. He sets the camera's timer before running over to join Dawn. Stepping over the deer's body, he grabs its antlers and holds its head to face the camera. As Dawn tries to warn him that the deer isn't truly dead, it knocks Sam back, and he falls off the edge to his death.