In life, Odin wrote novels entitled The Mysteries of Death and Thereafter and Joining the Great Majority, both of which have copies stationed at his memorial shrine.

In Edie and Sven's room Edith can find a shrine to Odin which has a viewfinder placed at its center. Within it is a recount of the events leading up to Odin's death accompanied by pictures. After Odin's wife, Ingeborg Finch, and newborn son, Johann Finch, died as the result of what he viewed as a family curse, Odin decided to move his daughter Edie, his son-in-law Sven, and his granddaughter Molly away from their home country of Norway. Odin packs up the remainder of his family and his house and sails away from Norway in hopes of finally being away from the Finch family curse. On the way, very high waves crash the boat, killing Odin and sinking the house. Edie's husband, Sven, builds a new home for his wife and newborn daughter, Molly, on the shore they land on. Odin is the first to be buried in the new family cemetery.

The Odin Finch Memorial Park (where his grandson Sam would die years later) was named in his memory, and a monument of Odin standing atop the sinking house is created by Edie at the Finch's new graveyard.

An oil painting of Odin.

Odin at his wife and son's graves.

Odin's monument at the family graveyard. 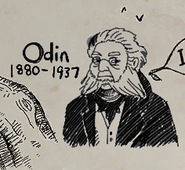