Molly Finch was the firstborn and the first daughter of Sven and Edie. On December 13, 1947, two days after her tenth birthday, Molly was sent to bed without dinner by her mother, and decided to eat various non-edibles until dying in her bed. She is the first member to have her story witnessed by Edith Finch.

Molly was a little girl who seemed to love the color pink and her pets: a gerbil and a goldfish named Christopher. She was interested in nature and fantasy, as evidenced by several objects and decor in her room. She had a very active, yet disturbing imagination as expressed by her last diary entry that Edith reads and the player lives through.

Molly showed an interest in animal biology; she owned an ant farm, a Pacific Ocean depth chart, a starfish with a severed leg, a microscope with a butterfly underneath, and jars holding insects, as well as multiple animal plushies and masks. She also had a flag advertising the Orcas Island Calves and a trophy for being a Washington Invitational 1946 Participant, indicating that she had participated in sports; the trophy appears to depict either a runner or a diver.

The player plays as Molly acting out the last day of her life in accordance with the diary entry she wrote. Molly starts by waking up in bed, unable to sleep because she was so hungry, and her mother made her go to bed without eating. First, she eats her gerbil's food and looks for her Halloween candy. She finds no candy so she goes to the bathroom. Here, she eats an entire tube of toothpaste before she eats the berries from the holly on her window sill.

From this point, Molly's story turns otherworldly. Molly sees a bird outside of her window and turns into a cat in order to chase it and eat it. After eating the bird, Molly turns into an owl in order to hunt rabbits so she can feed her bottomless hunger. After consuming rabbits, Molly turns into a shark that falls into the ocean so she can eat a seal. Afterward, Molly turns into a "monster" (either a large snake or a large octopus) that lands on a ship. Molly eats every passenger on board before smelling her human self. She slithers through the pipes of her bathroom and under her bed where she wakes up as a human in her bed. She claims the monster is still under her bed where it is waiting for her to fall asleep so it can eat her.

I'll be gone soon, but I wanted to tell somebody about what's gonna happen. It started when Mom sent me to bed without dinner. I woke up and I was starving. So I looked around for something to eat.

Then I heard chirping outside my window. It was a barn swallow going back to her nest. I reached out for her, and suddenly... I was a cat! I tried to be quiet but the bird was really scared. Mom and Dad didn't even look at me. I jumped and I almost got her. I could tell she was getting really tired. Now I was up in the big tree. I promised dad I wouldn't climb it anymore. But all I cared about was eating that momma bird.

I gobbled her up... And suddenly I was an owl! First, all I heard was the wind. Then I heard little teeth nibbling in the grass. I imagined his face looking up and seeing mine, through my talons. I swallowed him up, and I didn't chew one bit. Then I flew off to find something bigger. She was almost too big to carry. I started choking, but I couldn't stop eating. And suddenly I was a shark!

I rolled off a cliff and into the ocean. Now I was hungrier than ever. I wanted fat, juicy seals. I tore off her flipper and it tasted really good. I grabbed on tight. But I was so hungry, I jumped out of the water. When I opened my eyes, everything had changed. Now I was a monster. and I smelled people everywhere. I was big, but I moved real quiet. I wanted to stop but also I didn't.

After the last passenger, I was still hungry. And across the water I smelled something new. Something I had to have. So I swam towards it. I slithered onto the sand and the good smell went into an old pipe. I got closer and closer. All my stomachs started growling. And suddenly, I was me again. I held my breath for a long time but I couldn't hear anything. I think it's waiting for me to fall asleep. But it's not going to wait much longer. It needs to feed. And we both know... I will be... delicious. 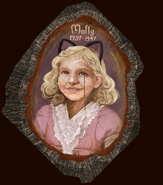 A photo of (most likely) Molly from the walls of the house.

A photo of Molly from her memorial shrine.