11 (at time of disappearance)

Milton Finch (ˈmɪl.tən ˈfɪntʃ | Miltin Finch) is the secondborn and the second son of Sanjay and Dawn, the younger brother of Lewis, and the older brother of Edith. Milton disappeared for unknown reasons in 2003 (a year after his father's death) at the age of 11 years old, When his sister Edith was only 4 years old. He was never found.

In a Reddit AMA with Giant Sparrow, Milton was confirmed to be the same character as the King from the studio's previous title, The Unfinished Swan.

Milton is a prodigy child and was very passionate about painting in particular. His room, styled to look like a castle, is filled with paintings and art supplies.

Milton's story plays out as a cartoonish flipbook that he made, entitled "Milton Finch in 'The Magic Paintbrush'". When Edith picks it up, she flips through the pages to animate the story. In the story, Milton is working on a drawing of a man, which comes to life and gives him a paintbrush. Milton proceeds to use the paintbrush to make a flipbook (implied to be the one Edith is holding). The perspective zooms in on this flipbook, wherein Milton uses the brush to paint a black door with a gold knob. He turns the knob and opens the door before stepping through it, bowing, and closing the door. At this point, the flipbook ends and Edith puts it down. 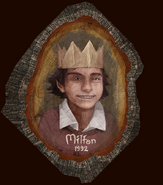 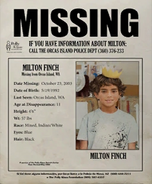 A photograph of Milton, his mom, and his siblings from Dawn's classroom.

A photo of Dawn, Lewis, Edith, and Milton.