Lewis Finch (ˈluːɪs ˈfɪntʃ | Luewis Finch) was the firstborn and the first son of Sanjay and Dawn, and the older brother of Milton and Edith. Lewis died one month before his 22nd birthday while working at a cannery, where he is strongly implied to have decapitated himself with a salmon deheader.[1]

Lewis is a half-Indian (by his father's side) and half-Norwegian (by his mother's side) man. He has dark brown hair which he would later dye blonde. He has darker skin than his siblings, freckles, a blond goatee, and a few piercings. In the game, he's seen wearing a red baseball cap, a white t-shirt with his name on it and number 9, blue gloves covered in blood and yellow wellies.

Little is known of Lewis's personality outside of his work in the cannery, though both Dr. Nuth's letter and Edith herself claim that he was a nice person who cared about his family. He was rather active in Edith's life, playing video games with her and telling her about secret passages, and on the refrigerator in the kitchen he's seen smiling and happy at one of Edith's birthdays.

There is a lot of marijuana paraphernalia[2] in his room as well as a hookah and remnants of the drug itself[3], suggesting his substance abuse stemmed from that as well as alcohol.[4] He is also mentioned as liking to play video games with Edith, although he was very bad at them.[5] He was proud of his Indian heritage and saw it as a way to distance himself from being "just a Finch".[6]

After Milton's disappearance, Lewis blamed himself and began to shut himself inside his room following his graduation. Dawn eventually got Lewis a job at the local L. P. Brown Cannery, where he would often bring home salmon for the family and their cat, Molly, to eat.

After seeking treatment for his cannabis addiction and deciding to go sober, Lewis began to notice how repetitive and tedious his life was, and decided to change that by creating an imaginary self in his mind achieving great things. This made him apathetic and depressed, as Lewis knew it was only a fictional version of himself, someone he could never actually be.[7] Though the daydreaming started out small, it eventually took over Lewis' entire life, as he stopped talking at work and would forget to go home. However, his boss noted that Lewis was a reliable and methodical employee even so. Eventually, the weight of a mundane reality combined with the longing to be his fictional self turned Lewis suicidal, and he eventually took his own life.

Lewis's story plays out on two levels where Lewis is working at the fish cannery, grabbing fish and using the factory automated guillotine to behead them and throw them onto the new area. As he is doing this, he begins imagining and maneuvering through a world where he is someone else. The world begins as a simple 2D labyrinth but soon becomes 3D, then starts to become more detailed and larger in scope as the image starts to overtake Lewis' vision of the real world.

In his imaginary world, he is a beloved ruler as opposed to an average cannery worker and he comes to prefer the imaginary world over his mundane reality. Soon the image of the fantasy completely covers the entire perception and he is no longer in a cannery but in his kingdom. He finds himself before his companion, where he bows his head to accept his crown, lowering his head with in a guillotine. The last thing heard is a slash, indicating that Lewis had taken his own life using the cannery's blade.

As Lewis's psychiatrist I can understand your desire for explanation. As I see it, the trouble began in January, shortly after we convinced your son to seek treatment for substance abuse.

Newly sober, I believe Lewis first noticed the monotony of his daily life. He kept working at the cannery but he withdrew part of himself. In our sessions I saw the same behavior.

His mind began to... wander. I asked him to describe it. He said he started small, imagining a labyrinth. He'd feel his way about. Then something moved... bats. And toads. And things that have not names. He knew it was all in his head, but he took it very seriously. I had hoped he'd find himself. But he found something more.

I worried about him then, daydreaming at the cannery. I spoke with his boss, but he said Lewis had become a model employee. Methodical, tireless, focused... Like a whole new Lewis. So I let him go on. I even encouraged him. It seemed very promising at first.

He told me he'd made a new friend on the edge of a city he named Lewistopia. He built the city up slowly, brick by brick. Then he made musicians and songs for them to play. He talked about starting a band and he was always humming something. Every day his imagination grew stronger. He no longer spoke at the cannery, but his chopping was as reliable as ever. Then one day it struck him that all the cheering crowds, even the stones under his feet were all in his imagination, so he could do whatever he wished. He held an election for a mayor and he won. They begged him to stay but his mind was already wandering.

It became a game for him. He'd conquer a city then immediately push on. He started drifting away from our reality. Until one day he forgot to go home from the cannery. Even as his mother pleaded with him, part of Lewis kept sailing on. In Lewisburg, he heard rumors of a beautiful prince/a handsome queen. The prince/The queen was on his/her own quest for radiant rainbows/sinister serpents. He followed the sound of his/her electric sitar/silver harp. His chase led him to a golden palace east of the sun and west of the moon.

Even then, his logic remained sound. He knew the world was all in his imagination, but he was so proud of having created it. In his own eyes, he'd become something greater than a king. For someone who'd never known success in the real world, I think it was overwhelming. And then it struck him that the real Lewis was not the one chopping salmon, but the one climbing the steps of a golden palace. "My imagination is as real as my body" he told me. It was hard to argue with him.

He began to forget the world we know. I think it pained him to remember Lewis, the cannery worker. He began to despise the man with the royal contempt. I still thought I could save him. Even after he said he was being crowned king over all the lands of Wonder.

The palace would be packed with his companions, including the wise calico who had insisted on advising him. His prince/queen waited, holding his crown. There was only one thing left to do. Bend down his head. And the rest I think you know.

Mrs. Finch, your son was a kind man who will be missed by all of us who knew him.

An official render of Lewis' fantasy self alongside his real self. 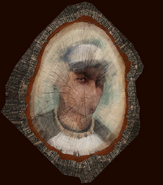 The reference photo Edie used for her shrine painting.

Dawn's classroom photo of her, Lewis, Milton, Edith, and Sanjay.

The fridge photo of Dawn, Edie, Lewis and Edith.

In-game shot of the fridge photo with its magnets. 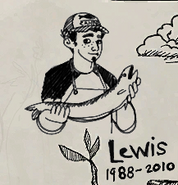