Johann Finch was the son of Odin Finch and Ingeborg Finch who died when he was still a newborn in What Remains of Edith Finch. Not much is known about him, apart from that he was born and died in Norway where Odin and Ingeborg used to live and was buried there. 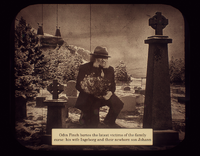