Gus Finch (ˈɡəs ˈfɪntʃ) was the secondborn and the first son of Sam and Kay, the younger brother of Dawn, and the older brother of Gregory.

Gus had fair skin, brown eyes and a pink mohawk. On the portrait painted by Edie we can see him wearing a blue shirt, and in gameplay, he has a spiky bracelet.

Gus was a rebellious child who disliked the prospect of his father remarrying and replacing their mother, saying that "he'd be dead before he'd see a wedding in [their] yard."

Upon Edith's discovery of Dawn's poem about Gus at his bedside memorial, the player controls Gus flying a kite on the day of Sam's remarriage following his divorce from Kay. The player must control the kite to find the letters to each stanza of the poem around the area. After a storm begins to brew, the wedding's attendants head inside a tent Sam had constructed, leaving Gus behind. The tent is eventually blown away by the storm along with a nearby totem pole; it strikes Gus down and causing him to fall, presumably killing him.

Our father never hit us kids, at least not very hard.
Before the day my brother said with teenage disregard
That he'd be dead before he'd see a wedding in our yard.

My father made him come of course, but Gus stood far apart
Just flew his kite and bottled up the storm inside his heart

I tried to talk him out of it, but though he'd never met her
"We don't need a stepmom," were the words that I remember

When the time for photos came dad ordered him to "Come here!"
But Gus declined and as a sign held up his middle finger

The thunder sounded much too close and full of angry power
But all my father said to this was "Make the music louder!"

I wish that I could truly say I thought about you on that day
Out there on the beach alone, just you the wind the sea and foam

But I didn't. Until we found you. 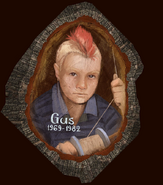 Edie's painting of Gus for his memorial shrine.