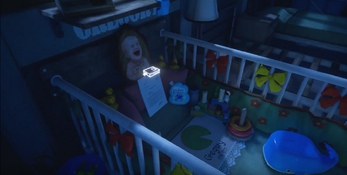 He reminded me so much of Calvin. Lost in his imagination.
– Sam Finch in his letter to his ex-wife, Kay Carlyle.

Gregory Finch (ˈɡre.ɡə.ri ˈfɪntʃ | Gregeree Finch) was the thirdborn and the second son of Sam and Kay, and the younger brother of Dawn and Gus. Gregory was an imaginative newborn, as noted by his father Sam's speculation after Gregory died from drowning in a bathtub due to parental neglect [1] a month before his second birthday.

Gregory was a fair-skinned, blue-eyed newborn. If he lived longer, he'd probably have blond or black hair.[1]

Sam, in his letter to Kay, says that Gregory used to laugh when he thought he was alone. Gregory probably saw things the rest of people could not see, which is proven to be right during the gameplay as a frog in the bathtub. His imagination made him very happy, which worried Sam, because he could "feel him slipping away", just like Gregory's paternal uncle, Calvin Finch.

On December 19, 1977, Kay was giving Gregory a bath, which was interrupted multiple times by Sam constantly calling her over the phone. Though Kay did drain the tub when Sam called, she left Gregory in the tub, which allowed him to turn the water back on using his toys, and he ultimately drowned. It is heavily implied that his death led to Kay and Sam's divorce.