Edith Finch Jr. (ˈiːd.ɪθ ˈfɪntʃ | Eedithh Finch) was the main character of What Remains of Edith Finch, the thirdborn and the only daughter of Sanjay and Dawn, and the younger sister of Lewis and Milton. After her mother being the latest in a long line of family deaths, she inherits the Finch House as the only known survivor of the Finch family and returns there to fill out her family tree and figure out what happened to her ancestors.

Though Edith's face is never visible during the game aside from her notebook drawing (in which she has long, dark hair tied in a ponytail, freckles, and a ring on a necklace), her body can be seen during regular gameplay. She wears an olive vest over a sweater and green shirt, a red scarf, a necklace holding a ring and a golden feather, a silver wedding band, black pants, laced black boots, and elaborate fingerless gloves knitted by her great-grandmother, Edie. In a render by character modeler Dan Valvo, Edith can be seen to have blue eyes and brown hair.

Edith is visibly pregnant, a fact which is not directly stated or implied until the walk from the broken railroad by Walter's bunker to Sam's room. Creative Director Ian Dallas stated in an interview with PC Gamer that this was the result of the team's tech artist, Chelsea Hash, wanting it to be shown, and that he liked that the reveal was something that players could discover on their own.

During the flashback, at age 11, Edith wears a white t-shirt with green sleeves and a blue bird graphic, purple plaid pajama pants, and mismatching, colorful socks.

During her childhood, Edith is shown to be a stubborn little girl, as she firmly resists having her great-grandmother Edie's book being taken, and she also resists at her mother Dawn's decision to leave without Edie.

As a teenager, however, she seems to be a mature girl, contemplating the significance of each family member's demise. Edith also demonstrates herself to be inquisitive and curious, as she ventures throughout the various hidden passageways and sealed rooms to find the answers she seeks.

After Edith inherits the family house following her mother's death (as well as a padlock key that allows her to traverse the house), she travels back to the house to uncover her family history. She enters the house and, throughout the game, ventures from room to room. Edith discovers shrines to nearly all of her family members, documenting their stories in her journal and gradually filling out her family tree. Partway through the game, she mentions that the reason for her exploration is that she is 22 weeks pregnant, and wants to inform her future son about his family. After investigating every other family member's story, she reaches her old bedroom and recounts her family's last night in the house:

That night, her mother and great-grandmother got into an argument about Edie's refusal to leave (and Edie's insistence on telling Edith the stories of the others). Edith is sent away from the dinner table and discovers a secret passageway into the previously-sealed library. There, she discovers a book left for her by Edie; this book tells the story of what happened the night Edith was born. The story retells how the old house was above-ground that day due to an earthquake in the ocean that receded the tide. Edie went out to investigate and claimed that the house suddenly appeared intact and that a light came on in the window. Before Edith can read further, Dawn appears and tries to take the book away from Edith; this results in the book tearing and Edith never discovering the end of the story. That night, Dawn left the Finch house with Edith for the last time, leaving Edie to wait for a nursing-home van to pick her up. Edie dies later that night, and Edith never sees her again. Several years later, sometime during mid-to-late October 2016[2], Dawn gives Edith a padlock key before succumbing to an unknown illness, leaving Edith as the last Finch. Soon later, Edith embarks on her trip towards the old family house.

Months afterwards, Edith gives birth to her son, Christopher[3] and is indicated to have died during childbirth, a month before her eighteenth birthday. She leaves to her only son the journal she had written in, and at the end of the game, he places flowers on her grave outside the house.

"Early on we tried having her talk much more directly about her feelings and her own story, but there's SO MUCH going on in the game already, just in exploring the house and going into all these stories, that for Edith to tell you a whole new story on top of that was too much, and most players just tuned it out.

So in the end we wrote Edith to, ideally, be talking about questions that players themselves had at that point in the game, so she's kind of a surrogate for verbalizing what the player is thinking or wondering about. That was pretty tricky, since the game had to be almost finished before we could really write that, and of course as we added dialogue for Edith that changed what players were thinking about or their understanding of the family, so then we had to write NEW dialogue for Edith, and the cycle kept repeating.

I'm happy about where we ultimately got, and I think Edith evolved into a much more interesting character than she was when we started."

The fridge photo of Edie, Dawn, Lewis, and Edith.

In-game shot of the fridge photo with its magnets.

Edith's journal sketch of herself.

Edie with Dawn and Edith on her 90th birthday. 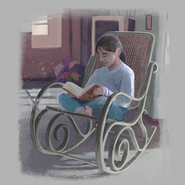 Edie's painting of Edith from the former's room.

Edith with her glove reaching out towards the mailbox.