Edith "Edie" Finch (ˈiːd.ɪθ ˈe.di ˈfɪntʃ) was the wife of Sven Finch and the maternal great-grandmother of Edith Finch. She was also the firstborn and the only daughter of original family patriarch Odin Finch. Of the Finches, she lived the longest at 93 and experienced every one of their lives and deaths.

Edie was an elderly woman with short, grey hair who often wore purple sunhats and clothing. When she was younger, Edie wore glasses.

Edie was a talented painter who could capture accurate representations of people from reference. Growing up surrounded by death, Edie wanted to remember and immortalize the people she lost; she roped off the rooms of her deceased loved ones, created shrines in their memory, and often painted portraits to accompany them. In her youth, Edie had a noticeable Norwegian accent which would fade with age.

Edith Finch was born on April 8, 1917 in Norway to Odin and Ingeborg. Edie briefly had a little brother, Johann, who would die as a newborn around the same time as her mother, Ingeborg. After she met Sven and had a child in 1937, Molly, Edie's father decided to take them and their house across the sea to the United States in hopes of escaping the curse. The house sank due to 40-foot waves near the shore of Washington, killing Odin and leaving Edie, Sven, and Molly to bury him in the new Finch Cemetery before starting a new home.

After Barbara's death at age 16, Walter becomes traumatized by the event and encloses himself within a bunker underneath the house; Edith notes that she once saw Edie bringing packages down to the basement bunker, indicating that she may have been bringing him new food supplies and other essentials. Her son Calvin would die a year later after flying off the backyard swing. On August 26, 1964, Edie's husband Sven was crushed and killed by a dragon slide he was making on Walter's 12th birthday, August 26, 1964.

Years later, her son Sam married a woman named Kay Carlyle, Edie would become the grandmother to three children, Dawn, Gregory, and Gus, the latter two of which would die in the following years and cause Sam's divorce and remarriage. The next year, Sam died in 1983.

Years later, her granddaughter Dawn married a man named Sanjay Kumar and had three children, Lewis, Milton, and Edith (causing Edith to start being referred to as Edith Sr.) On the night of Edith Jr.'s birth in 1999, an earthquake in the middle of the ocean caused the "lowest tide in a thousand years", subsiding far enough to allow access to the wreckage of the old Finch house. Edie visited the house's ruins for the first and last time and found "things [she'd] forgotten ever existed, but when [she] saw them they felt like old friends" and she "can't explain".

In 2003, her great-grandson Milton mysteriously disappeared, causing Dawn to blame Edie. In 2005, Edie's last surviving child, Walter, died. After Lewis' death in 2010, Edie began creating a memorial shrine for him; however, she never finished it, as she found out a week later that Dawn was planning to leave the house that night with Edith. Edie left a book in the library in order to tell Edith what she found on the night of her birth, but after Dawn intervenes and forces Edith to leave, Edie watches from the porch as Dawn and Edith drive off.

Though Dawn decided to send nursing home workers to pick her up the next day, Edith says that "[Edie] was already gone" by the time they arrived and marks her as having died in 2010 in her notebook, indicating that she died. As Dawn mentions the bad reaction caused by mixing some of Edie's medication with alcohol, Edie may have killed herself by having caused this reaction, intentionally or unintentionally.

Edie makes her first appearance in the game during Molly's story, where Molly can ask her mother if she can exit the room yet. After transforming into a cat, if Molly looks into Sven and Edie's room, she will spot the two, Sven standing as Edie lays in bed. Within the ViewMaster on Odin's memorial shrine, a photo of Edie with Sven can be found. Her voice can also be heard in her son Calvin's story when she calls them for dinner. She is also seen in her daughter Barbara's story when she is taking Sven to a hospital after he slipped into a table saw.

Edith's last story depicts the last dinner she had with Edie prior to leaving the house with her mother. As Edie and Dawn argue over Dawn's reasons behind leaving and whether Edith should learn about the family history, Edith discovers a book chronicling Edie visiting the old sunken house on the night of Edith's birth; however, before finishing the story, Dawn interrupts and causes the book to rip before immediately driving Edith away. Edie's silhouette can be seen watching the car leave from the porch of the house before fading from view. 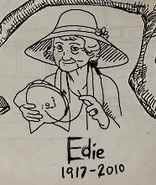 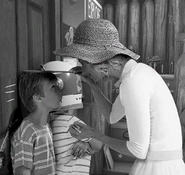 A photo of Edith with her sons Calvin and Sam.

The fridge photograph of Edie, Dawn, Lewis and Edie.

In-game shot of the fridge photograph.

A photograph of Edie, Dawn, and Edith on Edie's 90th birthday. 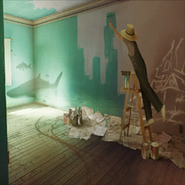 Edie stepping with her husband and baby onto Washington land.

Edie with her baby and husband while constructing the new house.