Dawn Finch was the firstborn and only daughter of Sam and Kay, and the older sister of Gus and Gregory. She was also the wife of Sanjay and the mother of Lewis, Milton, and Edith. Dawn died from an unknown disease at the age of 48 years old when her daughter was only 16 years old.

During her childhood, Dawn had an interest in reading and learning.[1] Although she eventually warmed up to adventuring outside in nature, she didn't take to developing survival skills as Sam originally intended and she regretted shooting a stag to appease her father, suggesting she may have had a gentler nature. Edith describes her as having not been "much of an optimist" outside of her hope that Milton had survived after his disappearance.

Though she is initially shown to be more relaxed in comparison to her father, Sam, Dawn became more cautious and apprehensive about the family curse following his death; Edith describes Dawn and her father as both "pretty intense." As deaths occurred in the family around her, Dawn sought to distance herself from painful reminders of her father's and brothers' deaths. In her teenagehood, Dawn developed interests in the fields of philanthropic work, teaching, and writing.

Dawn grew up in a military bunker-esque room alongside her siblings, Gregory and Gus. Raised by a veteran father, Dawn and her brothers had a set schedule of daily chores and activities. After Gregory's death in 1977 and her parents' divorce, Dawn's father decided to remarry to a woman he hadn't introduced his children to beforehand, to Gus' disapproval; at the wedding in 1982, Gus was killed in a storm while flying a kite, and his body was later found by Dawn and the others. She wrote a poem for Gus, which was later placed at the center of his memorial shrine. After Gus' death, Dawn moved up to a loft overlooking her and her siblings' old bedroom.

On June 16, 1983, Dawn went on a hunting trip with her father, Sam, where he convinced her to shoot a deer resting on a cliff. Afterwards, Dawn sobbed over its body as Sam attempted to take a timed photo with her to commemorate the moment, ignoring Dawn's warning about the deer's twitching; moments later, the deer bucked Sam off the cliff to his death as she reached out to him in vain. Dawn and Edie began to bond more in the aftermath of Sam's death.

In 1986 and 1987, Dawn was involved in volunteering and disaster relief work in India, where she met and eventually fell in love with Sanjay. She took an interest in Indian culture which would spread to her home life, apparent in the decorations within her teenagehood room (including an Indian lamp and rugs) and the presence of several Indian cookbooks around the Finches' house. A week after her graduation, Dawn moved to India and obtained a job teaching English. A year later, she and Sanjay had their first son, Lewis, born on December 27, 1988. Four years later, they had a second son, Milton, born on May 19, 1992. Seven years later, they had their third child and only daughter, Edith, born on February 14, 1999.

After Sanjay's death on February 22, 2002, Dawn moved with her children back to the Finches' house, where Edie built a new wing for them to stay in. Dawn began homeschooling her children (though not as their only form of education, given that Lewis is known to have attended and graduated from Orcas Island Regional High School). She kept reminders of Sanjay within her closet (which contained his disaster relief vest and nametag, a framed photo, and a copy of an excerpt from the 1941 book Daily Prayer) and within her home classroom.

As Dawn aged, she became an intense and emotionally reserved individual. Following the deaths in her family, she developed an interest in spirituality and religion, as described by her daughter Edith, which helped her cope with her grief.

Following her husband's death in 2002, Dawn returned with her children to her family house, where Edie built a new wing for them to stay in. She homeschooled her children, seeking to pass on values of science and critical thinking. She wrote a book entitled "To Teach and To Learn - Seven Ways to Create a Fulfilling Classroom", which would go on to be published by Orcas Publishing.

Dawn and Edie often clashed over how their family history should be handled; while Edie attributed the deaths to the curse and insisted on memorializing them for future generations, Dawn wanted to leave the past behind and prevent her children from being exposed to the family's stories. Despite her stance on bringing up the past, Dawn would name their stray cat "Molly" after her relative of the same name and Edith after her grandmother; Edith mentions that, had she been born a boy, Dawn would have named her after Gus instead.

Following Milton's disappearance, Dawn searched for months before sealing up all of the Finch house's bedrooms; however, Edie installed peepholes into the doors to keep the shrines visible. After Lewis's death, Dawn chose to distance herself from the Finch house again. She believed her grandmother's interest in remembering the tragic history and legends surrounding their family was what ultimately shaped their demise.

She died years later of an unspecified illness, with her daughter Edith at her side. 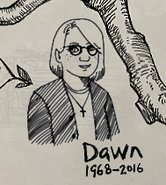 Sam's photograph of Dawn waking up.