What Remains of Edith Finch Wiki
Register
Don't have an account?
Sign In
Advertisement
in: Characters, Female Characters, Deceased Charactets

Barbara Finch (ˈbɑːr.bə.rə ˈfɪntʃ | Baarbru Finch) was the secondborn and the second daughter of Sven and Edie, Barbara died the day of her 16th birthday.[2] She was the child star of the family and one of the most famous Finches.[3]

Barbara was a young girl with long blonde hair, tied in a ponytail, blue eyes and freckles.[4] She wears casual clothing, but her regular set clothing is that of a polka-dot dress and a head bow.[5] After America grew tired of Barbara,[6] she got a job at a diner, now wearing a light sea green waitress suit.[7]

Barbara is known to be a child star and enjoys the job enough to pursue a career in Hollywood. In her adolescence, the scream she was iconic for had started to become difficult to do, as noted by her boyfriend Rick at the time.[8] When she was invited to Beastiecon 1960, she took it as a chance to rebound her career.[9]

Barbara's room is designed like a set with the Hollywood letters being changed to her name, indicating passion branching to abnormal self-confidence during the early years. In her adolescence, she would be less humble but more aware of her own limitations and held onto hope that she would not need to change her self-portrayal because of a tired scream breaking her voice.[9]

Gameplay with Barbara begins when she begins to worry about Rick not returning after entering the basement. Barbara winds the music box and unlocks the door to the basement. When she reaches the end of the stairs, she picks up a lone crutch used by Rick and uses it as a weapon. Passing the pool table, the portable radio announces the hookman killer Dr. Karl Hamel, the leader of the hoodlum gang terrorizing the local town recently. While walking through rooms, she witnesses the fridge shake. She approaches it, only to witness an individual with a Bigfoot mask on about to attack Barbara. She whacks them with the crutch and finds out it was Rick the whole time.

An argument ensues, with Rick being thrown out. Hours later, Walter loudly expresses distress. Barbara gets up with the crutch in hand and walks upstairs. She drags the sheets across to see Walter has disappeared. The bedside radio describes the hookman killer and urges safety procedures, only for Barbara to see it was too late, as she fights off the hookman who enters Walter's room as well. Barbara escapes, and she navigates through the attic passageway to her sister Molly's room (died years before). She opens her sister's door, approaches the hookman from behind, and whacks him with the crutch, having him stumble, trip over the upstairs rail, and fall to the level below.

Barbara walks downstairs to check the body, only to see it had vanished somewhere. The doorbell rings, and she goes to inspect it. A surprise party ensues with individuals in masks, which actually turn out to be the terrorizing hoodlums. They have Barbara express her signature scream before being killed and cannibalized, leaving only her ear in the music box.

Rick is Barbara's biggest fan and is also her boyfriend. Barbara cares for her boyfriend, proven as she becomes concerned from Rick's 20-minute absence in the basement, as she handles her aggression toward him before throwing him out, and as she keeps one of his crutches in Rick's memory.

His feelings for Barbara, however, appear to be attached mostly to her stardom, as he prioritizes getting her scream back while being overcritical on her current attempts, acting more like her agent. He even decides to scare Barbara to have her scream properly, not knowing how she would feel afterward. Barbara was furious enough to throw him out of the house and keep one of his crutches in retaliation. 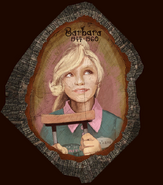 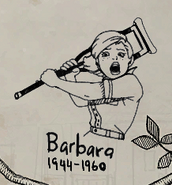 A cardboard cutout of a young Barbara.

A photo of a young Barbara on set.

A "My Friend Bigfoot" poster.

A young Barbara on-screen in the comic.

A teenage Barbara in the comic.

Barbara at her "surprise party" in the comic.

Barbara being consumed by the monsters in the comic.

Barbara's ear in the comic.